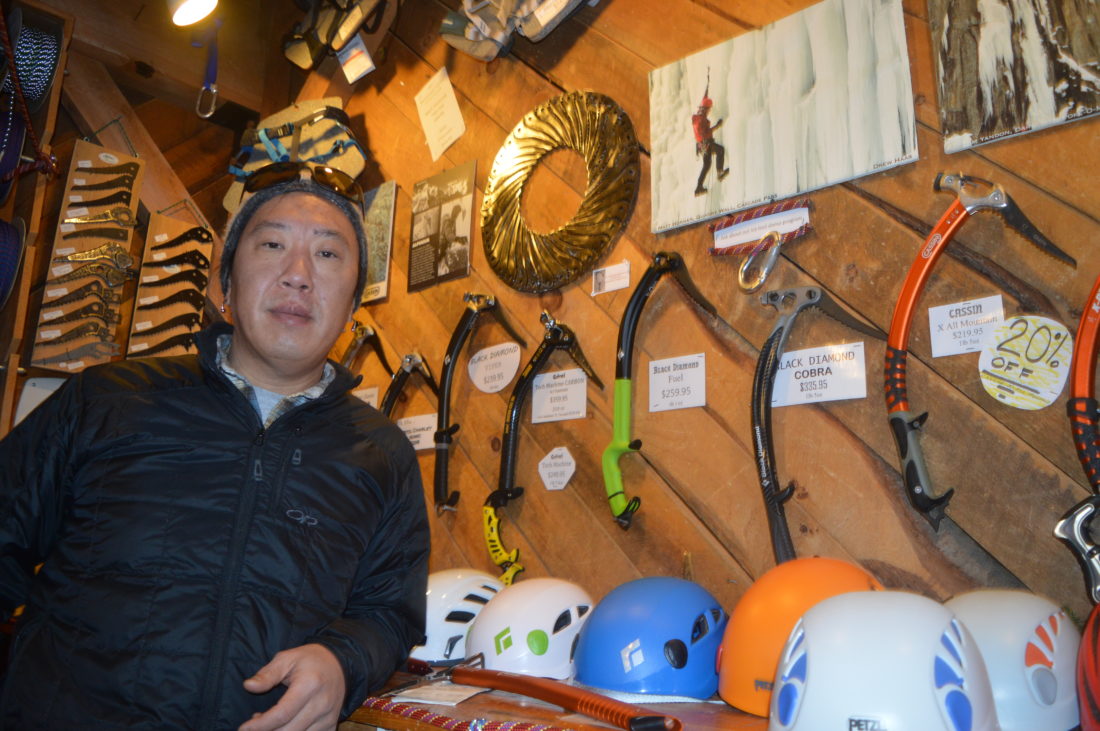 Matt Horner of Keene, an ice climber who was injured in a fall at Chapel Pond two months ago, stands beside a photo of himself climbing and one of his pieces of art at The Mountaineer in Keene Valley, made out of Charlet Moser ice axe picks. Horner also just designed a new interior sign for the store made out of 44 picks and will build a larger-than-life ice axe for the store’s exterior. (Enterprise photo — Antonio Oliver

LAKE PLACID — Matt Horner may be many things — artist, ice climber, fly fisherman — but one thing he is not is a dabbler.

Just two months removed from a grisly 60-foot ice climbing fall that shattered his face and nearly took his life, Horner sits amid all the outdoors gear adorning the walls at one of his second homes, The Mountaineer in Keene Valley.

Here, surrounded by the familiar confines of ice axes and climbing rope, he relays the evident: Considering the freaky and severe nature of his ice climbing accident at Chapel Pond just two months ago, for him to be back making art so soon reflects how his recovery is ahead of schedule.

But Horner also relays the kind of uncommon way through which he views his two preeminent passions: ice climbing and artistry, namely stone and steel sculpting. 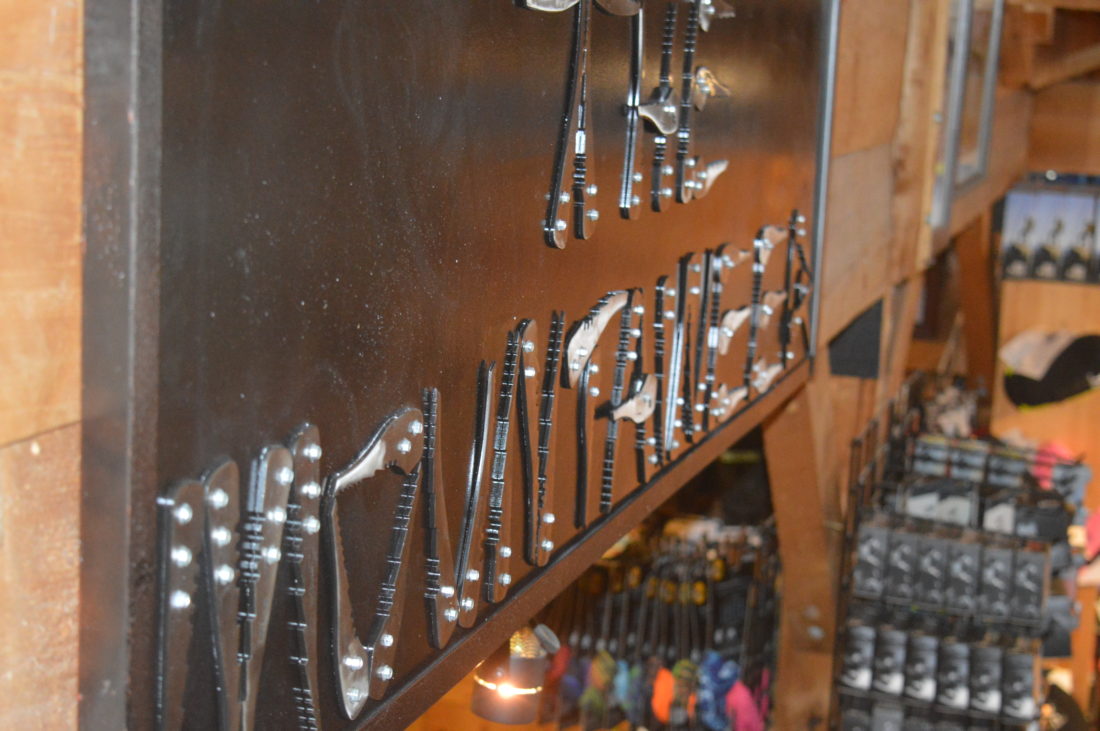 Ice climber and artist Matt Horner of Keene recently made this welcome sign for The Mountaineer in Keene Valley out of 44 Charlet Moser ice axe picks. (Enterprise photo — Antonio Olivero)

For Horner, ice climbing isn’t immersing enough for his deep-diving soul. He admits, he has a bit of an obsessive personality. And when it comes to feeding the fire, the boundless possibilities provided by sculpting are more freeing. There are no ice screws, ropes or forces of gravity that limit where he can go.

“Art is limitless,” he says. “Obviously, your physical body through climbing, you are limited through your own body you can only do so much with that. Sculpting, you can go any direction.”

Just 66 days ago Horner suffered the fall at Chapel Pond. It was an accident that broke every plate in his face, splintered his nose and dealt him a severe concussion and brain bleed. But within the past few weeks, the Keene resident, veteran guide for Adirondack Rock and River and sculptor has returned to crafting low impact steel sculptures.

He’s welded together antique hay hooks into wall art, crafted a perfectly symmetrical circle in an afternoon from 10-inch spikes he stumbled upon laying in a bucket. And his latest creation is a brand new sign for The Mountaineer.

Pulling on the climbing rope that serves as a door knob, the Mountaineer’s heavy wooden front door opens up into an outdoorsman’s oasis, complete with a canoe hanging from the ceiling to the left to vintage pack baskets and a tent on the right. Smack dab in the middle now, though, the shop has completed its welcome with a sign crafted by Horner.

The sign is a sculpture that reflects a cross-section of Horner’s two passions, ice-climbing and art. Comprised of 44 Charlet Moser ice axe picks, the words “The Mountaineer” are now fastened between the store’s first and second floors, greeting the customers with jagged razor-sharp font.

This piece, Horner says, is unlike most of the artwork he makes out of ice picks, such as another piece that resides fewer than 20 yards away, adjacent to the store’s ice axes. Next to a photo of Horner scaling ice at the Quarry Wall at Cascade Pass, the circle of ice picks shines a silvery gold in the light.

And The Mountaineer and store owner Vinny McClelland also are contracting Horner to build another greeting to stand outside the front door: a massive ice ax, taller than a human. Horner is unsure at the moment what it will be comprised of. Whatever the case, McClelland said he is looking forward to a man he described as a family member of The Mountaineer community surprising him with his latest work of art.

“Matt’s gonna surprise me,” McClelland said. “The guy is so talented,. He’s a close friend and he supports us and we support him. It’s a symbiotic relationship, kind of like a family.

The Mountaineer’s support for Horner also includes letting him use their satellite store down the street as his stone Studio, where many of his sculptures go from idea to reality.

The store also helped to organize and promote the GoFundMe online crowdsourced fundraiser for Horner in the wake of his February climbing accident. In just a few days, people from all walks of Horner’s life rallied to eclipse the $30,000 goal to help with his medical expenses and the cost of living while he was out of work. Since, the fundraiser has leaped another $10,000.

“I was absolutely floored,” Horner said of the support.

“Just, I mean, the response from people in my life I haven’t seen since high school,” he added, “People from so many different communities, all these different communities just gave me an incredible amount of support. Even just casual friends, or people I don’t really know. It just shows that there is a lot of good out there.”

But what of that Feb. 8 accident? How and why did it occur to such an acclaimed and experienced Adirondack climber? And will Horner ever climb again?

Horner described it as a freak accident, and though he and his doctors are likely forever be unsure of why he took a 40-foot free fall at Chapel Pond’s Rhiannon route, Horner believes it had something to do with his abnormally low Vitamin D levels on that day.

“The doctors said they were surprised I was even functional,” he said.

The fall occurred, he said, due to what Horner described as a split-second “short circuit” of his brain while he was climbing 40-feet above the experienced climber he was guiding that day, a Long Island woman named Stacy Ries.

The short circuit caused Horner to black out momentarily, resulting in him letting go of his ice axes lodged into the Rhiannon route.

Afterward, Ries told Horner that when he fell it looked like he just “slumped over and let go.” A second later, Horner said he came back to and felt himself falling, his body rotating, he said he could actually see what was transpiring as gravity amplified his fall.

“And it was just so confusing to me,” he said. “As they say, when those things do happen, time does slow down. Somehow I started spinning face forward and face down.

“My friends always joke and I always joke, too. They call me the human lawn dart,” he added poking fun at the very serious incident. “I’m top heavy and tend to flip.”

Horner’s face made impact after 40 feet, then he slid another 20 feet. One of his tubular threaded screws prevented him from sliding further. Ries slowly lowered him down the rest of the way. With so much adrenaline rushing through his body, he said he didn’t feel any pain — a much different experience than his only previous serious accident, when he tore his achilles tendon in the Cascade Pass.

“I saw it coming,” he said. “Of course, I saw the ice ledge rushing up as I was falling face first. The second I impacted, of course, I blacked out. I believe I was in and out. I woke up and a guy from a climb next to us came over and assisted. He pulled me upright and tried to make sure I hadn’t snapped my spine, which could have easily happened.

Horner walked out on his own, flew to Burlington for medical treatment and eventually ended up downstate in his hometown of Mamaroneck in Westchester County, where he saw several doctors.

Since the accident, Horner has focused on self-healing, as despite the gruesome injuries he suffered, surgery was only recommended and he opted to not undergo any operations. His severe concussion — the most unrelenting of his injuries – will still take many more months to fully heal, however.

On Thursday at the Mountaineer, the sun shone through partly cloudy skies, temperatures reaching 52 degrees as the cascading AuSable River behind the shop hinted at spring and summer. But when winter returns, and his latest works of art are completed, Horner promises that he will be back out on the Adirondack ice enjoying one of his profound loves.

“I love it because it’s something that you have to constantly read,” he said. “I like the idea that it’s a constantly changing medium, unlike my sculptures, which are stone and steel. They are very different in that way. “I’ll be climbing.”

The Mountaineer and Patagonia Transform Black Friday into Green Action